The Coalition Against Global Genocide is proud to announce that founder/executive director Roz Duman received the 2021 Trailblazer Award in January in recognition of her contributions to the civil rights movement in Colorado. The award is part of the annual Martin Luther King, Jr Business Awards, which are presented to individuals, corporations, and nonprofit organizations for exceptional community service endeavors in the honor and memory of Dr. King.

Duman says three driving forces have guided her life: her Jewish values, her late father Rabbi Samuel Adelman and an incident she experienced while growing up in the South. Born in Dover, New Jersey, in 1941, her family moved to Newport News, Virginia—a segregated city plagued by racial discrimination—when she was in middle school.

In front of a class, Duman’s seventh grade teacher asked her, “Is it true you live in a block full of N– and if so, how can you?” Taking a moral cue from her father—who had an open instinctive love for all people—and developing a rebellious streak that today we call “making good trouble,” she spoke out and then continued her activism by sitting in the back of buses, drinking from Black water fountains and using Black bathrooms. She knew that in her future she wanted to make a difference in people’s lives. 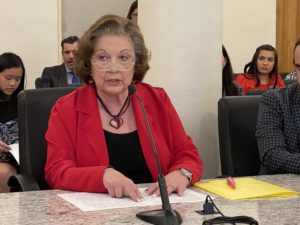 Prior to her senior year in high school, her father accepted a position at BMH synagogue in Denver and the family moved to the Mile High City. There, she met her future husband Dr. Sidney Duman during a summer home from college. The pair married in 1960 and had four children.

During her tenure as a stay-at-home mother, Duman became involved with the local community. She worked with the Committee of Concern for Soviet Jewry, an organization that her father founded before passing away to help persecuted Jews to leave Russia. That role led her to join the staff of Congresswoman Patricia Schroeder, a pioneering advocate for women’s rights and reforms. In 1982, Duman opened the first regional office of the America Israel Friendship League, which aims to promote better understanding between the people of Israel and the United States.

In 2006, Duman and a small group of volunteers organized a successful Conference on Genocide and Crimes Against Humanity, which eventually became what is known today as the Coalition Against Global Genocide, a nonprofit with the mission to educate, motivate and empower individuals and communities to oppose genocide and crimes against humanity. Her many other roles have included director of scheduling and later director of volunteerism for the Agency for Human Rights and Community Relations for Mayor Wellington Webb’s administration; director of the Holocaust Awareness Institute at the University of Denver and chair of the Outreach Committee for JewishColorado.

“Dr. King’s commitment to justice, equality, nonviolence and serving others allowed him to lead a movement for social, institutional, and legal changes,” said Governor Polis, during the ceremony. “These individuals and organizations deserve our heartfelt gratitude for doing their part to emulate King’s ideals and make his dream a reality. Colorado is better because of you, and in these most challenging times, your work is more important than ever.”

Our scientific power has outrun our spiritual power. We have guided missiles and misguided men.”