It has been defined as the “systematic destruction by a government of a racial, religious, or ethnic group.” 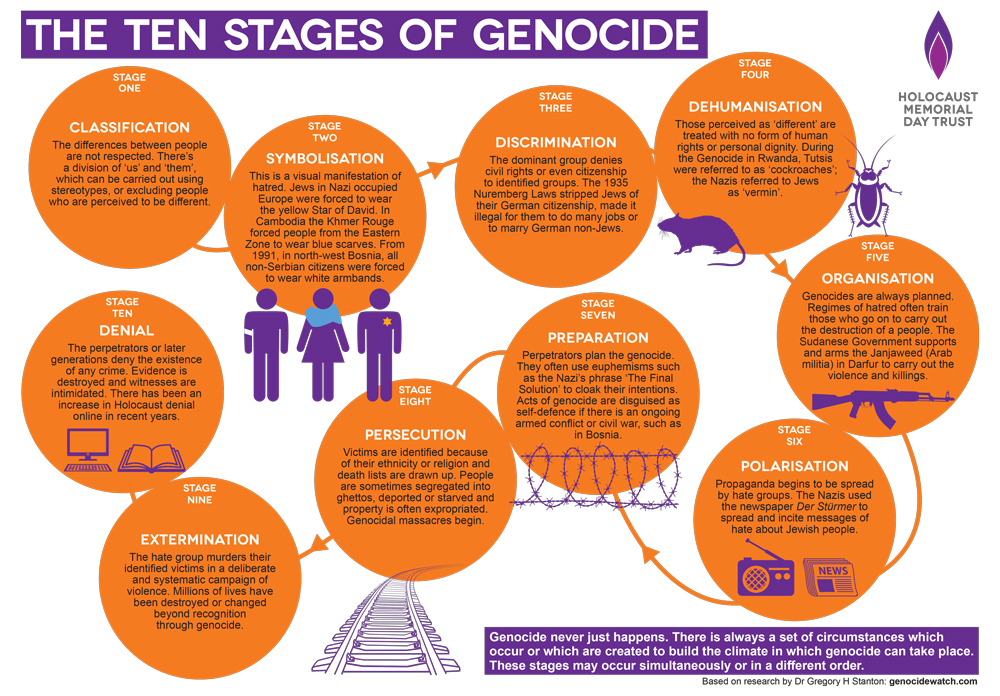 The term “genocide,” which did not exist before 1944, is a very specific term, referring to massive crimes committed against groups. Human rights, as laid out in the U.S. Bill of Rights or the 1948 United Nations Universal Declaration of Human Rights, concern the rights of individuals.

In 1944, a Polish-Jewish lawyer named Raphael Lemkin (1900-1959) sought to describe Nazi policies of systematic murder, including the destruction of European Jewry. He formed the word “genocide” by combining geno-, from the Greek word for race or tribe, with -cide, from the Latin word for killing. In proposing this new term, Lemkin had in mind “a coordinated plan of different actions aiming at the destruction of essential foundations of the life of national groups, with the aim of annihilating the groups themselves.” The next year, the International Military Tribunal at Nuremberg charged top Nazis with “crimes against humanity.” The word “genocide” was included in the indictment, but as a descriptive, not legal, term.

On December 9, 1948, in the shadow of the Holocaust and in no small part due to the tireless efforts of Lemkin himself, the United Nations approved the Convention on the Prevention and Punishment of the Crime of Genocide.

This convention establishes “genocide” as an international crime, which signatory nations “undertake to prevent and punish.” It defines genocide as follows:

Genocide means any of the following acts committed with intent to destroy, in whole or in part, a national, ethnical, racial or religious group, as such:

Killing members of the group;

Causing serious bodily or mental harm to members of the group;

Deliberately inflicting on the group conditions of life calculated to bring about its physical destruction in whole or in part;

Imposing measures intended to prevent births within the group;

Forcibly transferring children of the group to another group.

While many cases of group-targeted violence have occurred throughout history and even since the Convention came into effect, the legal and international development of the term is concentrated into two distinct historical periods: the time from the coining of the term until its acceptance as international law ( 1944-1948 ) and the time of its activation with the establishment of international criminal tribunals to prosecute the crime of genocide (1991-1998). Preventing genocide , the other major obligation of the convention, remains a challenge that nations and individuals continue to face. (see note below)

The phrase “in whole or in part” is important. Perpetrators need not intend to destroy the entire group. Destruction of only part of a group (such as its educated members, or members living in one region) is also genocide. Most authorities require intent to destroy a substantial number of group members – mass murder. But an individual criminal may be guilty of genocide even if he kills only one person, so long as he knew he was participating in a larger plan to destroy the group.

A national group means a set of individuals whose identity is defined by a common country of nationality or national origin.

An ethnic group is a set of individuals whose identity is defined by common cultural traditions, language or heritage.

A racial group means a set of individuals whose identity is defined by physical characteristics.

A religious group is a set of individuals whose identity is defined by common religious creeds, beliefs, doctrines, practices, or rituals.